A telecom-band single photon source has been epitaxially grown on silicon. The emission is provided by an InAs quantum dot embedded in an InP nanowire whose diameter and conical geometry have been optimized to increase the collection efficiency and obtain a Gaussian emission profile.

Quantum cryptography requires the use of bright single-photon sources emitting at telecom wavelengths and efficiently coupled to optical fibers.
At INL, we have studied the MBE-VLS growth, on silicon substrate, of InP nanowires in which an InAs quantum dot emitting at telecom wavelengths is inserted. We focused this work on the optimization of three parameters:
1) A low density (<0.1 nanofil/μm²) of vertical nanowires on Si (111) substrate is obtained to allow the study of single nanowires by micro-photoluminescence.
2) Growth of 300-350 nm diameter nanowires to ideally couple the quantum dot emission into the fundamental mode of the nanowire (HE11 mode).
3) Control of the axial and radial nanowire growth to lead to a conical shape with a taper angle of less than 7 ° in order to increase the photon extraction efficiency and reduce their angular dispersion.
Optical studies have validated the relevance of this strategy. The emission of telecom-band single photons is confirmed at cryogenic temperature. In addition, the study of the source radiation pattern revealed a Gaussian profile that has a very good coupling efficiency into a single mode fiber.
All of this work demonstrates that III-V semiconductor single photon sources emitting at telecom wavelengths can be monolithically grown on silicon via nanowire technology. 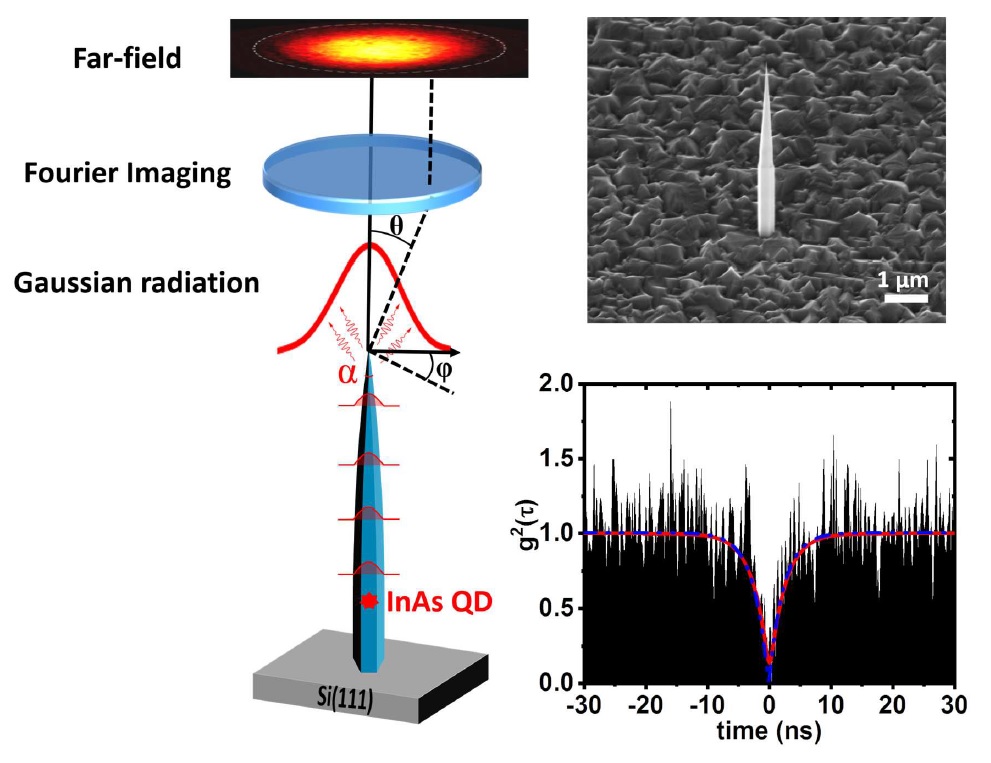