Growth of GaAs/AlGaAs nanowires for tandem solar cells on silicon

Regular networks of self-catalyzed nanowires (NWs), with high vertical NW yields (85-90%) and including a p.i.n radial junction inside an Al0.2Ga0.8As shell around a p-GaAs core, were grown on patterned Si(111) substrates for the development of NWs-based Tandem Solar Cells (TSC).

The NWs were grown on patterned substrates of 0.9 x 0.9 cm2 with a hole network (50 nm in diameter and pitch equal to 500 nm) in a SiO2 mask (the patterning was done at C2N by A. Cattoni and coll.). The choice of Al0.2Ga0.8As as a constituent of the top cell is due to its bang-gap equal to 1.7 eV, which is the optimal value for TSC with a Si bottom cell. The presence of a GaAs core is a neccessary step to bypass the impossibility of growing Al0.2Ga0.8As NWs directly on a Si substrate via the self-catalyzed VLS mechanism. The high vertical NW yields were obtained thanks to a growth procedure including a thermal pre-treatment of the patterned substrates for 15 mn at a temperature 15°C higher than the NW growth temperature.
The as-grown p-GaAs/p.i.n-Al0.2Ga0.8As core/shell NWs were characterized by Electron Beam Induced Current (EBIC) microscopy at C2N (group of M. Tchernycheva). The current results extremely uniform along 83% of the NW length, thus suggesting the presence of a conformal radial p-i-n junction. I(V) curves measured on single NWs have also revealed a diodic behaviour with very low leakage currents (up to -2V), thus confirming the good quality of the radial p-i-n junction. Such NWs can be therfore considered as potentially well-performing building blocks of the TSC top cell.

C2N, A. Cattoni, G. Patriarche and M. Tchernycheva,
IMEP-LAHC, group of A. Kaminski-Cachopo
This work was done in the framework of the HETONAN ANR project and as part of the Marco Vettori PhD thesis. 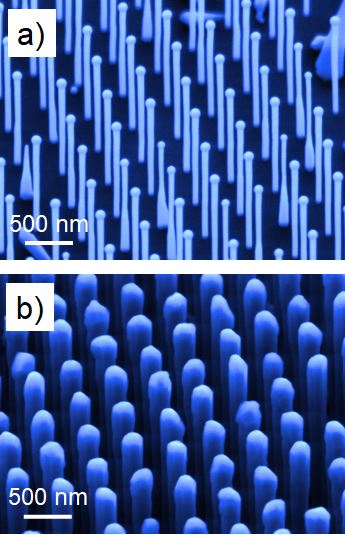