Accueil - Highlights - Crystallization of SrTiO3 on Si: the knitting machine

Crystallization of SrTiO3 on Si: the knitting machine

We have elucidated the mechanism that allows SrTiO3 to cristallize on silicon during molecular beam epitaxy (MBE) process in the drastic conditions imposed by interface reactions (low temperature and low oxygen partial pressure).

This mechanism requires a sligth excess of Sr to be provided at the early stages of the growth. SrTiO3 MBE growth process is initiated at low temperature, in the 300°C range. In these conditions, the deposit is amorphous and we have shown that it is composed of a partially separated mixture of SrO and TiO2. During further annealing under UHV, SrTiO3 cristallization occurs as a result of the reaction between SrO and TiO2, on condition that a slight excess of Sr has been provided during low temperature deposition. If not, the mixture remains separated and no cristallization is observed. An optimal Sr/Ti ratio of 1.015 has been determined.

By studying the evolution of the deposit microstructure during the UHV annealing step, we have shown that SrTiO3 nucleation occurs at the oxide/Si interface, and that SrTiO3 nuclei grow laterally by advancement of a Sr-rich growth front: all growing cristallites are terminated by a SrO plane. Ensuring a SrO termination for all individual growing cristallites is the reason why an excess of Sr is needed. The SrTiO3 lattice is progressively formed from the separated mixture by incorporation of interstitial TiO2 planes at the Sr rich growth front, according to a microscopic “layer swapping” process similar to that described in Lee et al., Nat. Mater. 13, 879, (2014). When two neighboring cristallites coalesce, both Sr rich growth front merge by forming a SrO planar fault (additional SrO plane in the crystal). This process results in a antiphase domain morphology where SrO planar faults form antiphase boundaries. 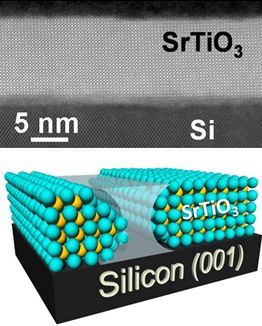