For low rates charged particle tracking, we have developed a 3D Silicon Coincidence Avalanche Detector (3D-SiCAD) featuring low noise, high spatial and time resolutions, adopting a 3D flip-chip integration technique (Fig. 1). This new device tackles an important limitation of Single-Photon Avalanche Diodes (SPADs), which are p-n junctions operated in Geiger Mode by applying a reverse bias above the breakdown voltage. Indeed, SPADs have the advantage of featuring single photon sensitivity with timing resolution in the picoseconds range. Nevertheless, their relatively high Dark Count Rate (DCR) is a major issue for charged particle detection, especially when it is much higher than the incoming particle rate. Our novel device implements two vertically aligned SPADs featuring on-chip electronics for the detection of coincident avalanche events occurring on both SPADs. Such a coincidence detection mode allows an efficient discrimination of events related to an incoming charged particle (producing a quasi-simultaneous activation of both SPADs) from dark counts occurring independently on each SPAD [1]. The particle detection efficiency and noise rejection capability for this novel device have been evaluated by means of a β- strontium-90 radioactive source (Fig. 2). The 3D-SiCAD device outperforms single SPAD detectors: the former is indeed capable to detect particle rates much lower than the individual DCR observed in a single SPAD-based detectors; i.e. 2 to 3 orders of magnitudes lower (Fig. 3) [2].

This work has been achieved through a collation between INL, APC, IPNL, LPSC labs with the support of CEA-LETI. The research leading to these results has received funding from the People Program (Marie Curie Actions) of the European Union’s Seventh Framework Program FP7/2007-2013/ under REA grant agreement n° [317446] INFIERI “INtelligent Fast Interconnected and Efficient Devices for Frontier Exploitation in Research and Industry” and from the CNRS (PEPS INSIS “Sciences de l’ingénierie pour la santé” 2016 ref. DP2CI). 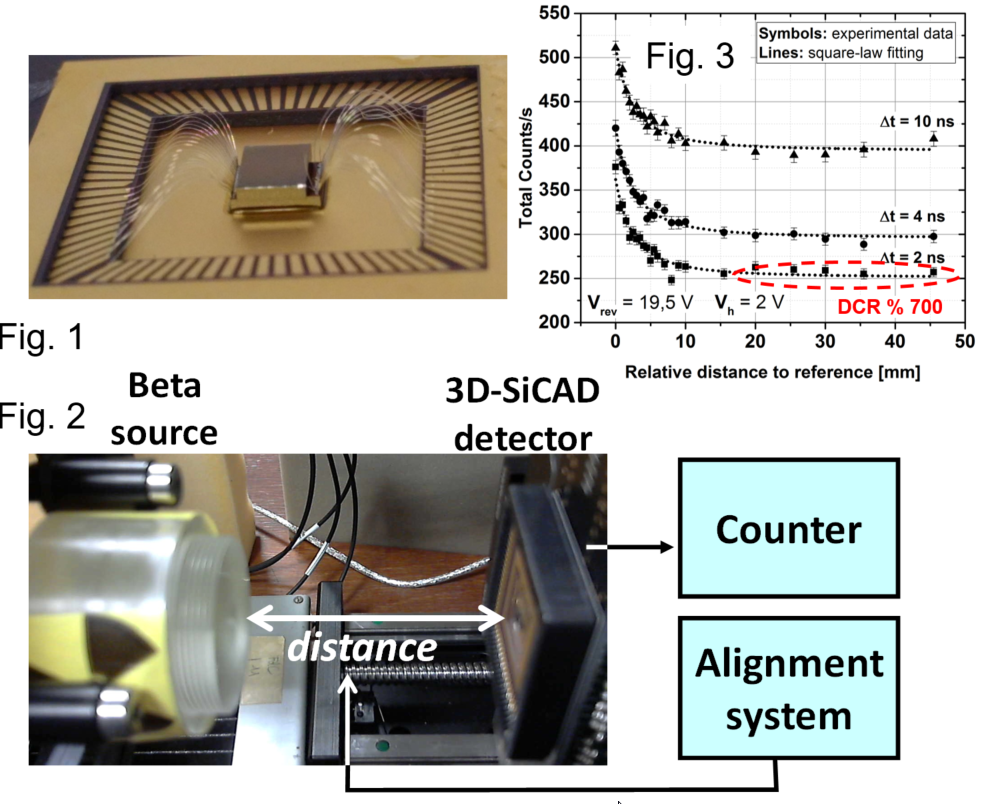 Fig. 1: Microphotograph of the 3D-SiCAD prototype showing the two stacked dies with wire-bondings on left and right edges of the bottom die. The size of the die is 2.3 x 3 mm²; Fig. 2: Microphotograph of the experimental setup; Fig. 3: Counting of the charged particles emitted by the strontium source as a function of the distance (the noise floor is much lower than the noise of each SPAD).